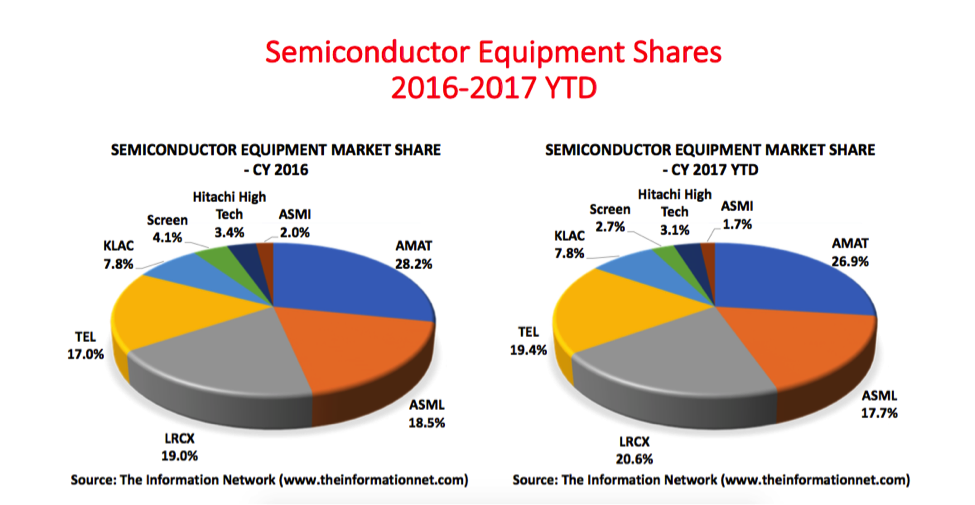 The semiconductor production industry is always going through various changes due to a variety of factors in the market, and in 2017 it was no different. Some of the major influences over the years have included the introduction of new technology, global economic shifts, and an ever-changing market segment.

With that said, throughout the three quarters of 2017, the market shares of major semiconductor equipment producers saw large gains–including firms like Lam Research and Tokyo Electron, according to the report “Global Semiconductor Equipment: Markets, Market Shares, Market Forecasts,” recently published by The Information Network, a New Tripoli-based market research company.

Other firms that produce semiconductors managed to make gains. Lam Research experienced a gain of 1.6 share points, which helped it to grow from a 19.0% share position back in 2016 to a 20.6% share as of the year to date.

When viewed from a competitive aspect, Applied Materials is capable of competing against both of its semiconductor manufacturing rivals, deposition equipment, dielectric equipment, and non-tube low-pressure chemical deposition.

The firm also competes against other companies like Screen Semiconductor Solutions that dropped around 1.4 share points in 2017, wet clean equipment, and photo-resist track.

The Global Semiconductor FFU Market is Looking Up

All in all, certain changes in the semiconductor market may have come as a surprise to some, especially a few of the major players. However, according to SEMIs findings, an industry group, the semiconductor field managed to grow by around 41% during 2017.

TES-Clean Air Systems is the go-to company for Semiconductor FFUs, pharmaceutical semiconductors, and custom FFUs. For more information call (510) 656-5333 or contact us online.