It’s a great time to serve the Semi Equipment space!

For decades the Wafer Fab Equipment Market (WFE), being extremely sensitive to market share, runs full speed to the edge of the cliff, and then over, at which point in time the market crashes for a year or so, and then the cycle repeats. And this cycle has repeated for decades. But now we have hit a point where a confluence of factors has erased this pattern.

1) More and more of the cost of today’s cars is electronics systems. And with self-driving cars being basically computer systems with wheels the figure could go well north of the 50% predicted here in 2030, depending on the adoption of the self-driving cars.

See also, this interesting report on the coming complexity in the auto industry.

2) The Internet of things (IOT). Due to the staggering amount of data that will need to be moved, processed, and interpreted, the Compounded Annual growth Rate (CAGR) for this part of the industry is expected to outshine all other areas in Semi.

In fact GE alone expects to invest 60 trillion over the next 15 years (that is Trillion with a T!)

3) Possibly the largest factor is the fact that the way memory chips are made has recently reached a point where the chip cannot be made on a single plane but instead must be made with “3D” architecture. (see picture below)

The result is that the number of process steps to make a finished NAND Flash memory device averages 10 times the process steps. (so lots more equipment needed) . Plus the 10X formula is just a starting point for added steps, as the steps are related to the number of layers on the NAND Flash chip. At present this number averages 10 layers, but in 2017 Samsung is expected to release a 72 layer device, and SK Hynix a 64 layer device. So the “process per chip produced” is going up, up, and up. And in addition to this part of the formula, the demand for memory in the next few years is expected to grow to over one hundred billion in sales by 2020, and predicted to still grow into 2021. 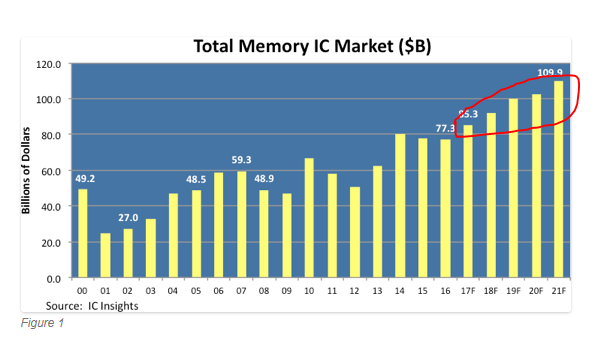 Only 65% of memory production is current 3D NAND Flash, and so as that percentage climbs, the number of process steps needed, in total, climbs even further.

Serving the Wafer Fab Equipment Market-a good place to be.