Due to new findings regarding the IC sales growth of DRAM and NAND flash memory, the 2017 McClean Report has compiled a mid-year update to the IC market forecast.

The 2nd half of 2017 saw a much more robust sales growth than what was initially predicted at the start. The publication now reveals that the IC market is marked for a 16 percent increase because of a surge in demand for DRAM and NAND-based IC chips. Following the trend, IC Insights has made adjustments and now sees an explosive growth of about 55 percent for the DRAM sales and a 35 percent increase for the NAND flash sales. 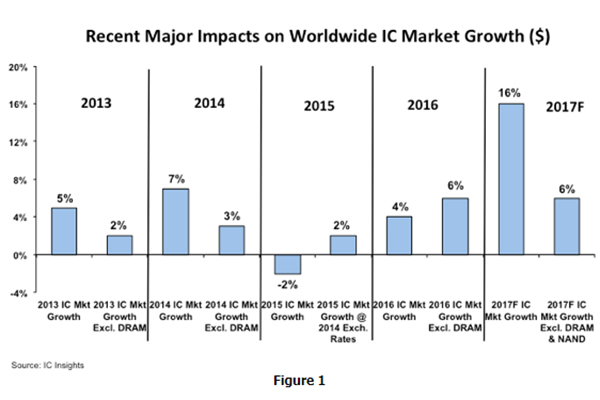 The reason for the market increase is more because of the fast-rising prices rather than the demand for it. If the markets are excluded in the forecast, then the potential growth is just fixed at 6 percent.

The new figure standing at $64.2 billion has shown that the DRAM market is poised to become the single largest product within the industry of IC sales in 2017. It will outpace even the MPU market for standard servers and PCs currently expected to grow by $47.1 billion.

IC Insight’s economic global forecast is on track with the initial expected projections in the first McClean Report. Some of the unchanged forecasts include the IC wafer capacity, capital spending in sales percentage and electronic systems production. Some of the conditions and factors were slightly upgraded in accordance to the mid-year report. In some cases, the GDP global forecast gained a .1 increase on up to 2.7 percent total for the year 2017, which was considered to be the global recession threshold.

Annual IC growth is expected to follow the forecast period in regards to the worldwide GDP growth performance.

The US economy stands as one of the most impactful driving forces in the current worldwide economy. It is expected that the US economy will continue its modest growth following progress markers such as having low oil prices, PMI figures of 57 and 55 during the first and second quarter of 2017 and an improving unemployment rate. Some significant growth changes made in the report included an increase of semiconductor capital spending, IC average selling prices and IC unit shipments.